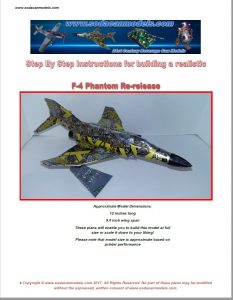 The McDonnell Douglas F-4 Phantom II is a twin-engine, long-range supersonic interceptor and fighter-bomber developed by McDonnell Aircraft. It first entered service in 1961 with the United States Navy. The F-4 proved highly adaptable in its use by the United States Marine Corps and the United States Air Force, and by the mid-1960s had become a major part of their air arms.

The Phantom is a large fighter with a top speed of over Mach 2.2. It can carry more than 18,000 pounds of weapons on nine external hard points, including air-to-air missiles, air-to-ground missiles, and various bombs. Designed without an internal cannon, the F-4 later incorporated an M61 Vulcan rotary cannon.  Beginning in 1959, it set 15 world records for in-flight performance, including an absolute speed record and an absolute altitude record.

PLANS SALE!  ALL plans 30% off with coupon code, ‘Summer heat’ Through the end of Summer!!