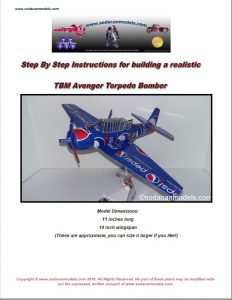 The Avenger entered U.S. service in 1942, and first saw action during the Battle of Midway. Despite the loss of five Avengers on its debut, it survived to become the most effective torpedo bomber of  WWII. The TMB Avenger shared credit for sinking the super-battleships Yamato and Musashi and being credited for sinking 30 submarines. Greatly modified after the war, it remained in use until the 1960s.

The Avenger was the heaviest single-engined aircraft of World War II, and only the USAAF’s P-47 Thunderbolt came close to equaling it in maximum loaded weight among all single-engined fighters, being only some 400 pounds lighter than the TBF, by the end of World War II. To ease carrier storage concerns, simultaneously with the F4F-4 model of its Wildcat carrier fighter, Grumman designed the Avenger to also use the new Sto-Wing patented “compound angle” wing-folding mechanism, intended to maximize storage space on an aircraft carrier; the Wildcat’s replacement the F6F Hellcat also employed this mechanism. The engine used was the twin-row Wright R-2600-20 Twin Cyclone fourteen-cylinder radial engine, which produced 1,900 horsepower

PLANS SALE!  ALL plans $5 through the Spring!